Several studies demonstrated a significant decrease in prescription errors, adverse drug events, treatment costs and improved patient outcomes, when a clinical pharmacist (CP) was a full member of a multidisciplinary team in the intensive care unit (ICU). Our aim was to evaluate the activities of a CP, included in a 12-bed medical ICU team of a university hospital in the course of several months. We conducted a retrospective analysis of all the CP’s interventions from March 2017 to November 2017, carried out and documented after reviewing and discussing patients’ medical data with the treating ICU physicians. We identified four main categories of CP’s interventions: pharmacotherapy adjustments to kidney function (PAKF category), drug-drug interactions (DDIs category), therapeutic monitoring of drugs with narrow therapeutic index (TDM category), and drug administration by the nasogastric tube (NGT category). During the study period, 533 patients were admitted to the medical ICU. The CP reviewed the medical data of 321 patients and suggested 307 interventions in 95 patients. There were 147 interventions of the PAKF category, 57 interventions of the TDM category, 30 interventions of the NGT category, and 22 interventions of the DDIs category. Fifty-one interventions were unspecified. The majority of all interventions (203/307) were related to antimicrobial drugs. ICU physicians completely accepted 80.2% of the CP’s suggestions. We observed that regular participation of the CP in the medical ICU team contributed to more individualized and improved pharmacological treatment of patients. Therefore, ICU teams should be encouraged to include CPs as regular team members. 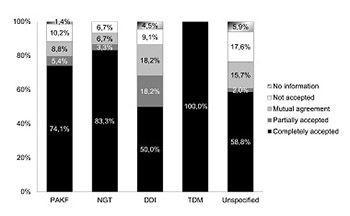 Several studies demonstrated a significant role of a clinical pharmacist (CP) as a full member of a multidisciplinary team in the intensive care unit (ICU) [1-5]. Full membership of a CP in the ICU team includes the presence at the daily rounds in the ICU, cooperation, and availability for consultations throughout the day [6].

CPs in ICUs are focused on the optimal use of pharmacotherapy to improve patients’ safety and to achieve increased survival as well. The competences of CPs in the critical care settings are of significant importance due to the patient’s critical condition, polypharmacy, and rapid and frequent modifications of pharmacotherapy. Correct drug dosing, identification and prevention of adverse effects, drug interactions, and errors in pharmacotherapy are among the most important goals for CPs. CPs should also suggest alternative therapies, cost-effective use of drugs and provide education of ICU staff, in particular in the use of antibiotics. It is not surprising that the number of CPs throughout the world has increased in recent decades and their role in many health-care teams became well defined [7,8]. In addition, the Critical Care Societies consider a CP as an essential member of the critical care team [9]. In developed countries, pharmacists can now be found in almost all critical care units [8].

Our aim was to evaluate the activities of a CP, recently included as a part-time member of a medical ICU team in a university clinical center during a period of several months.

We conducted a retrospective analysis of the CP’s interventions from March 1 to November 30, 2017, in a 12-bed adult medical ICU at University Medical Centre Maribor. The CP became a regular part-time member of the medical ICU team shortly before March 2017. Before regular involvement with the ICU team, the CP was trained by an experienced senior CP for several months and was further gaining experience in clinical ICU pharmacy during 5-year consultations at the request of the attending ICU physician.

All patients admitted to the medical ICU over the study period were eligible for inclusion, and patients with at least one prescription reviewed by the CP were included in the study.

During the study period, the CP visited the medical ICU every working day (Monday–Friday) from 11 a.m. to 1 p.m. (excluding weekends and holidays), checking the diagnosis of each patient, daily laboratory and microbiology test results, and the prescribed therapy of each patient.

The CP suggestions of drug dosing regimen were based on multiple literature sources: the Summary of product characteristics (SmPC) of every specific drug [10], UpToDate® Database [11], Micromedex® Database [12], The Renal Drug Handbook [13], Critical Care Pharmacotherapy [14], and others [15,16].

The CP daily assessed the route of administration for the prescribed therapy - subcutaneous (sc.), intravenous (iv.), oral, or by a nasogastric tube (NGT). If a drug was administered by a NGT, the CP suggested a different dosage form of the same active substance or alternative medication, if originally prescribed medication was unsuitable [10,17].

Pharmacist-guided therapeutic drug monitoring (TDM) for vancomycin, gentamicin, and amikacin has already been established at our university hospital years before, using the pharmacokinetic program Kinetidex®. The TDM service was continued by the CP in the ICU team.

The CP actively participated in the department’s daily main round and discussed every suggestion or comment with the treating ICU physician and other members of the ICU team. The CP documented acceptance of suggestions.

Retrospectively, the CP’s interventions were sorted into five categories: i) pharmacotherapy adjustments to kidney function (PAKF category) [mainly adjustments of dosing regimen], ii) TDM category (dosing adjustments according to serum concentration of drugs with a narrow therapeutic index), iii) DDI category, iv) administration of drugs through the NGT (NGT category), and v) unspecified interventions (Unspecified category). Acceptance of suggestions was classified either as “completely accepted” (accepted without additional discussion), “mutual agreement” (accepted in a modified form), “partially accepted” (completely accepted, but the information was lost while rewriting the therapy) or “not accepted”. Suggestions with no feedback were classified as “no information”.

The Institutional Medical Ethics Committee approved the study (UKC-MB-KME-27/19) and waived the need for informed consent because of the retrospective nature of the study. We conducted the study according to good clinical practice and protected the patients’ personal data according to the Law on Personal Data Protection.

We performed only descriptive statistical analysis using IBM SPSS Statistics for Windows, Version 24.0. (IBM Corp., Armonk, NY, USA) after data were collected by Microsoft®Office Excel. The results were presented as numbers and percentages of the CP’s interventions in each intervention category and numbers and percentages of accepted recommendations.

During the study period, 533 patients were admitted to the medical ICU. The CP reviewed prescribed medications of 321 patients and made 307 interventions in 95 patients. From all 307 interventions, 203 (66%) were related to antimicrobial drugs.

The distribution of the CP’s interventions according to the intervention category is presented in Figure 1.

There were 147 interventions of the PAKF category [in 58 patients] (Table 1). Almost one-third of interventions (27%) were associated with dose adjustments related to renal replacement therapy (RRT).

Dose adjustments to kidney function were most frequently suggested for antimicrobial drugs (124 interventions; 84% of the interventions of the PAKF category), mostly for meropenem, piperacillin/tazobactam, imipenem/cilastatin, cefepime, ciprofloxacin, and acyclovir. Non-antimicrobial drugs excreted by the kidneys represented 16% of the PAKF category (23 interventions), mainly levetiracetam, rosuvastatin, and methylnaltrexone. The CP suggested prescription of an equipotent dose of atorvastatin instead of rosuvastatin or simvastatin in seven cases, and low molecular weight heparin instead of rivaroxaban in one case.

The CP intervened 22 times within the DDI category [in 13 patients] (Table 3), most often due to concomitant use of clopidogrel and esomeprazole.

There were 51 interventions of the Unspecified category [in 39 patients] (Table 4).

In this retrospective analysis of the CP activities in the medical ICU team, we observed that regular participation of the CP contributed to more individualized and improved pharmacological treatment of patients. Our observations confirm that even a part-time presence of a CP in the ICU team intercepted a number of prescribing errors, having the potential for substantial clinical impact.

In our study, almost half of all interventions were of the PAKF category. The majority of drug dose adjustments to kidney function were observed with prescription of antimicrobials. This was also observed in the studies of Jiang et al. [32] and Kim et al. [33]. Almost a third of interventions of the PAKF category was associated with dose adjustments related to RRT. As demonstrated by Jiang et al. [34], continuous RRT is most frequently associated with dosing errors, in particular during interruptions, modifications, and discontinuation of RRT. Prompt adjustments of drug dosing are therefore very important.

Inappropriate administration of medications by the NGT led to 23 interventions. Crushed pantoprazole gastro-resistant tablets were most often the subject of the CP’s intervention, and this was also observed in other studies [35,36]. The CP suggested to avoid the administration of large particles and crushed extended-release or gastro-resistant dosage forms by the NGT.

Interventions of the DDI category represented 7% of all interventions. However, potential DDIs can be identified in almost all of ICU patients. Smithburger et al. [37] identified 457 potential interactions in 240 ICU patients, and 25% of DDIs were considered as major (based on the Lexicomp® and Micromedex® databases). Ziehl et al. [38] identified potential DDIs in 96% of the studied patients, with only 5% of DDIs confirmed by the intensivists. The problem in identifying DDIs is the discrepancy in the rating of DDIs when different databases are used.

The well-established pharmacist-guided TDM at our institution was even improved in this study. Occasionally, the CP observed a delay in drug application as the result of diagnostic or treatment procedures or inappropriate timing of blood sampling. These factors are important in the daily practice of an ICU and should be taken into account when the dosing regimen is adjusted based on serum drug concentration.

We identified 51 interventions in the Unspecified category. Among them, 20 interventions were the result of human error and eight were associated with inappropriate preparation and storage of medication. In future, the CP should focus more intensely on preparation of parenteral drugs.

In the ICU team, there was a high rate of acceptance of the CP’s suggestions, as 80.2% of the suggestions were completely accepted and 8.8% were accepted after mutual agreement. In other studies, a 74% “rate of consensus” between pharmacists and physicians was found by Klopotowska et al. [2], 87% of the pharmacist’s suggestions were “accepted or taken into consideration” in the study of Johansen et al. [3], and 90% of “recommendation acceptance rate” was found by Bourne et al. [31]. In our study, the majority of completely accepted suggestions were of the TDM category, as the pharmacist-guided TDM was the most familiar to the ICU physicians due to previous successful cooperation with pharmacists.

We conclude that, despite the limitations of this retrospective analysis, the results of a single CP that collaborated with our medical ICU team only part-time are encouraging. A significant number of CP activities identified and prevented drug prescription errors and significant drug interactions, improved drug preparation and drug administration, individualized drug dosage, and decreased the risk of adverse events. The CP mainly intervened in four types of drug-related problems, such as pharmacotherapy adjustment to kidney function, drug-drug interactions, dosing adjustments of drugs with a narrow therapeutic index, and drug administration by the NGT. About 48% of all interventions were related to pharmacotherapy adjustment to kidney function and 66% of all interventions were associated with antimicrobial drugs. A dedicated CP in the ICU team improved the quality and safety of pharmacotherapy in critically ill patients.

Biomolecules and Biomedicine is the official journal of the Association of Basic Medical Sciences of FBIH
ISSN: 2831-0896 (Print) 2831-090X (Online)