Diabetic neuropathy represents late diabetes complications, and diabetes duration and long-term hyperglycemia are the main reasons for polyneuropathy. The goal was to estimate the effects of alpha-lipoic acid on symptoms of diabetic neuropathy after 600 mg i.v. for 3 weeks and 3 months of 300-600 mg of alpha-lipoic acid per os. This study has been designed as a multicentric, in 5-centers in B&H, carried out by 5 physicians with 20 diabetic patients each. Following parameters were monitored in 100 diabetics suffering from Type 1 and Type 2 diabetes, both men and women: diabetes duration, diabetes therapy, duration of polyneuropathy symptoms, height, weight, BMI (body mass index), subjective assessment of patients, objective examinations of physicians and subjective assessment of physicians. 100 diabetics, average age 61,36; oldest 79, youngest 40, suffered from diabetes in average 11,9 years. There were 35 men and 65 women, 16 with Type 1 and 80 with Type 2 diabetes, while 4 patients were not classified. 69 were having insulin therapy and 31 oral hypoglicemics. Shortest diabetic status was less than a year, and longest was 28 years. Average duration of polyneuropathic symptoms was 3,02 years, shortest was less than a year, and the longest was 15 years. Average height was 1,70 m, average weight 76,13 kg, and average BMI 26,51 kg/m2. Significant statistic differences in improvement were recorded (P>0,05) according to Fridman's test for repeated measurements compared to initial findings in assessments: sensory symptoms of polyneuropathy, pain sensations as polyneuropathy symptoms, total score of polyneuropathy symptoms, subjective assessment of patients, subjective findings of physicians, and significant differences were not find (P>0,05) in autonomous and motoric neuropathy. Based on the conducted study, we have concluded that the application of alpha-lipoic acid during 3 months has helped to decrease the symptoms of diabetic neuropathy and in only one case out of 100 included patients there was no subjective improvement after drug application. 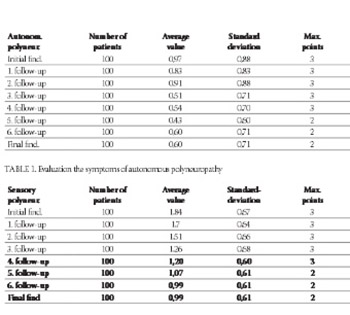