The goal of this study was to determine the effects of antenatal corticosteroids and surfactant replacement on the severity and frequency of Respiratory Distress Syndrome (RDS) in a cohort of premature infants born in Sarajevo, Bosnia and Herzegovina, from 2005 to 2007. The cohort consisted of 172 premature neonates with estimated gestational age between 26 and 34 weeks. Babies with IUGR, babies of diabetic mothers and babies with major congenital defects were excluded. Out of 172 neonates, 80 were treated antenatally with corticosteroids (single course of dexamethasone) and 92/172 were not. There was no statistical difference (p>0,5) in average gestational age (31,2 vs. 31,0 GW) and male/female ratio between investigated groups; there were significantly more male patients (p<0,05) in both groups. Frequency of RDS was significantly lower in the corticosteroid group (24/80) in relation to the control group (54/92) (p<0,001). Severe RDS was significantly (p<0,01) more frequent in the control group 34/53 (62,96%) then in the corticosteroid group 6/24 (25,0%). Bovine surfactant(Survanta) was given as a rescue therapy to 78 babies with clinical and radiological signs of RDS who required FiO2>0,40 and mechanical ventilation. Early surfactant administration within six hours after birth appeared to be effective at reducing mortality then later surfactant administration (p<0,005). In the group of babies requiring FiO2> or =0,6 at the time of surfactant replacement, the mortality rate was significantly higher (p<0,05). In conclusion, we confirm the efficacy of antenatal corticosteroid treatment and early surfactant treatment in a cohort of premature infants born in Sarajevo. 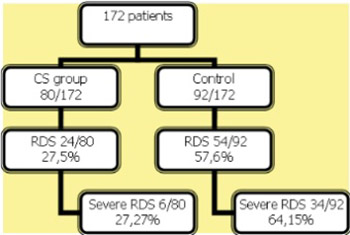 Biomolecules and Biomedicine is the official journal of the Association of Basic Medical Sciences of FBIH
ISSN: 2831-0896 (Print) 2831-090X (Online)