The objective of our study was to investigate the effect of Aliskiren, a renin inhibitor, on the deoxycorticosterone (DOCA) induced myocardial fibrosis in a rat model and its underlying mechanism. A total of 45 Sprague-Dawley (SD) rats underwent right nephrectomy and were randomly assigned into 3 groups: control group (CON group: silicone tube was embedded subcutaneously); DOCA treated group (DOC group: 200 mg of DOCA was subcutaneously administered); DOCA and Aliskiren (ALI) treated group (ALI group: 200 mg of DOCA and 50 mg/kg/d ALI were subcutaneously and intragastrically given, respectively). Treatment was done for 4 weeks. Sirius red staining was employed to detect the expression of myocardial collagen, and the myocardial collagen volume fraction (CVF) and perivascular collagen volume area (PVCA) were calculated. Radioimmunoassay was carried out to measure the renin activity (RA) and content of angiotensin II (Ang II) in the plasma and ventricle. Western blot assay was done to detect the expressions of extracellular signal-regulated kinase 1/2 (ERK1/2), phosphorylated ERK1/2 (PERK1/2) and matrix metalloproteinase 9 (MMP-9). In the DOC group and ALI group, the CVF and PVCA were significantly increased; the RA and Ang II levels in the plasma and ventricle were remarkably lowered when compared with the CON group. The RA and Ang II levels in the ventricle of the ALI group were significantly lower than those in the DOC group. Moreover, the expressions of ERK1/2, PERK1/2 and MMP9 were the lowest in the CON group, but those in the ALI group were significantly reduced as compared to the DOC group. ALI can inhibit the DOCA induced myocardial fibrosis independent of its pressure-lowing effect, which may be related to the suppression of RA and Ang II production, inhibition of ERK1/2 phosphorylation and MMP9 expression in the heart. 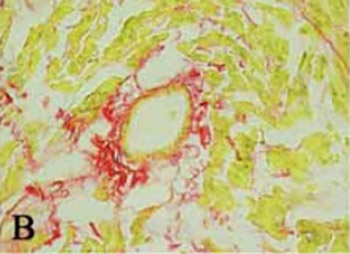