Analysis of miRNA expression under stress in Arabidopsis thaliana

MicroRNAs (miRNAs) are a class of small, 21-24 nucleotides long, non-coding RNAs involved in the post-transcriptional regulation of gene expression. Using the array analysis on Arabidopsis thalianainfected with the Oil-seed Rape Mosaic Virus (ORMV), we have found 28 up-regulated miRNAs. From them, six were selected for further validation by Northern blot analysis: miRNA172a, miRNA161, miRNA167a&b, miRNA168a&b, miRNA171a, and miRNA159. In addition, 29 miRNAs were detected in plants exposed to drought stress, 13 of those detected miRNAs were up-regulated and 16 down-regulated miRNAs. Out of 29 differentially expressed miRNAs during the abiotic stress, six miRNAs (167a&b, 168a&b, 173, 171b&c, 399d and 447c) were chosen for Northern blot and RT-PCR analysis to confirm the array results. Interestingly, four out of these six miRNAs, 171b&c, 168a&b, 399d, and 447c, showed very high abundance of pri-miRNAs and pre-miRNAs. Furthermore, mature forms of miRNAs171b&c, 399d, and 447c, were not detectable in the rosette leaves, indicating that miRNA processing is tissue specific. In conclusion, using the array analysis we show that 28 miRNAs are involved in the plant response to viral infection and 29 miRNAs are involved in the regulation of drought stress. We also demonstrate that at least some miRNAs involved in the stress response in Arabidopsis thaliana are regulated at the maturation level. One such example is miRNA 171b&c. This miRNA is transcribed in all tissues, evidenced by its detected pri and pre-miRNA forms; however, its mature form is constitutively or transiently expressed depending on the tissue type. 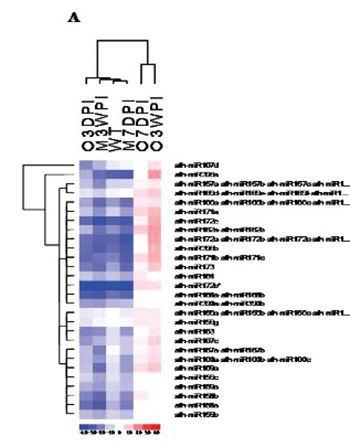